The Toyota Hilux pick-up truck is being evaluated for a launch in India. Widely considered to be one of the hardiest vehicles on sale, it comes with an enviable reputation for long-term reliability and mechanical robustness. Unlike something like a Mahindra Bolero pick-up, the Hilux is relatively expensive to build and will go up against its only real rival here, the similarly specced Isuzu D-Max V-Cross. Built on the same platform as Innova and Fortuner Hilux could be manufactured here Targeting a starting price of around Rs 15-16 lakh to take on Isuzu V-Cross Both 2.4 diesel and 2.8 diesel, the latter with 500Nm, being evaluated. 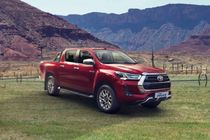 A compact 5 seater pickup with a 2.0 engine, on-road price of Rs 15 lakhs available in private registration could have plenty of takers from the small entrepreneurs/self-employed segments in India.