AUDI-A8 : THE game is backed #the transporter

The first eye-sight made anyone fallen in love with this 1. THE CAR IS NOT JUST A CAR ITS DIRECTLY CONNECTED To meah heartbeat. the way of its design omg one day i will gonna reveal it...at meah own garrage ...so hey a8 just wait for that moment,--coming for catching you soon. for a MAN suits a kinda attitude >>driving seat with a black barrier goggles olala...,,,,, turning radius is jst 6.35 mts so its a authenpic pic for the drift lovers #me....its a dream car ....thnnxx for the launching the epic 1. as talking for the starting torqie 580Nm @1750-2500rpm the speedy greedy. the diesel engine of the model firstly come with the BHP 246.74bhp @4000-4250rpm AND THE great carrying capacity engine of 2967 cc. all the things which has been lash in this are just damnly osm with its own crazyzying feature feathering on the road oo a great glamour recovered . this epic piece offers a Multi Function Steering System, .a Automatic Climate Control, PowerWindowsFront, Power Steering, Vanity Mirror & Front Cup Holders this all are amazing functions as user /' driving friendly to the man. It coughs out an average or giving an overall mileage of around 15.3, with a fuel efficiency within a city of 13.77 and on highways the mileage stands out as 16.77. he Audi A8 (Typ 4D) was presented in February 1994 and debuted at the 1994 Geneva Auto Show in March, with full-scale factory production commencing in June 1994 . although it was not until October 1996, for the 1997 model year that it became available in North America. Audi introduced the S8 4.2 quattro into the European market in 1996. The S8 followed the naming convention of other high-performance Audi "S" models such as the Audi A6-derived S6 and was similar in vein of Mercedes-Benz AMG models. In markets such as the UK, the S8 was only available with the automatic transmission. In 2002, the A8 L received standard xenon high-intensity discharge lamp (HID) headlights, and a heated steering wheel. A tyre pressure monitoring system (TPMS), an updated Symphony II stereo, and new exterior colours were also added. For 2002, all A8 variants received a trunk/boot interior release lever to facilitate escape in the event an individual became trapped within. 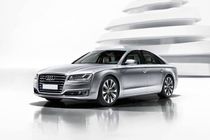