Devastating re-fuelling experience due to missing label on fuel flap and large tank nozzle size. This occurred with a brand new VW Tiguan Allspace that my father purchased beginning of January 2021. Hardly 2 weeks old, in mid-January, during a normal refuelling stop the pump-attendant filled in Diesel instead of Petrol in the 2.0l Petrol DSG Tiguan. This despite having parked right in front of the petrol dispenser and having explicitly told to refuel Petrol. My concerns with VW Tiguan: 1) They used larger Diesel nozzle tank-size for the petrol SUV and 2) VW / Dealer did not label the fuel tank flap ("PETROL-ONLY") for a large-size SUV. I own a Renault Duster SUV petrol 1.5l, which uses a smaller size nozzle and hence it is impossible to fill diesel instead of petrol. The consequence? The engine is destroyed and VW said they need to order a new engine from Germany, which will cost us approx. INR10Lakhs 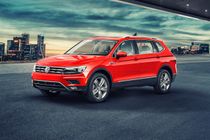