POLO : The Beast is Here

I bought this car in last April but got the car delivered after few months. Now i have used it for 16 months and trust me its just amazing i love driving this car its super . Its up to class in this segment this car feels luxury from inside and outside as well. If we talk about design its just amazing it's equal to maruti swift and performance wise there are no competitors of it. If we talk about room space it's just amazing its room space is massive fronts are for 2 one for driver and other for passenger and in rear easily 5-6 normal people can hop in with a ease. Now about mileage its not up to the ARAI this car only gives a average of 16-18 km pl on highways and in city it's up to 12-14 km pl with full a/c on. this car do comes with lots of accessories like light dimming, parking sensors vanity mirror and much more. This car is best in class and have a nice and powerful engine as compared with other cars in this segment this car has a good torque and power and can reach a tops peed of 150 kmph without any problems. Pickup its unbelievable in first gear it drifts the road with a roar and attains a speed of 20+ easily its good for overtaking on highways. I love this car so much it has all those thing that a common person would require. Volkswagen launched the Polo in 2010 to compete with the Hyundai i20 in the premium hatchback segment. The German manufacturer has been tweaking the Polo regularly with cosmetic and equipment upgrades to stay abreast with the competition. Volkswagen also tinkered with idea of hot hatches with Polo GT series. The latest string of updates on the Polo has made the signature grille a tad bit wider and it gets a chrome accent on the lower slat. The rectangular front fascia continues with the same headlamps but an added chrome strip across the length of the bumper connecting the fog lamp housings gives it more character. The side profile as well as the tail gate is the same but the tail lamp has been slightly revised to make it look modern. While the interior has been the same black and beige for a long time, the Polo cabin is one of the most pleasant ones in the lot. And with the regular equipment upgrades, the Polo now gets rain-sensing wipers, push-button start and electrically folding wing mirrors for the top-spec Highline trim. The Polo still remains the only hatchback to offer auto up and down functions for all four power windows. It gets height adjustable driver seat on the mid and top variants along with adjustable steering position. On the safety front, Volkswagen offers dual front airbags and ABS as standard across all variants, being one of the first manufacturers to give preference to safety in India. The Polo GT with automatic gearbox gets ESP. The Polo is offered with three engine options and three gearbox options. The 1.2-litre three cylinder naturally aspirated petrol engine comes mated to a five-speed manual gearbox and develops 74bhp of power at 5400 rpm and 110Nm of torque. The 1.2-litre turbocharged petrol, the TSi, powers the Polo GT TSI and develops 103bhp of power at 5000rpm and 175Nm of torque from 1500rpm. The GT TSi gets a seven-speed DSG automatic gearbox which drives the front wheels. The diesel engine is the 1.5-litre four cylinder turbo-diesel and is offered in two states of tune ? 89bhp for the standard Polo and 103bhp for the Polo GT. Even the torque developed in the GT is 20Nm more than the 230Nm available in the standard state of tune. The diesel is mated to five-speed manual gearbox. The Polo pitches itself in the premium hatchback segment competing with the Hyundai i20, the Maruti Suzuki Baleno and the Honda Jazz. With the other three being fairly new products, the Polo?s build quality, handling and performance makes it a formidable competitor. Exterior It is a design that doesn't age, looks stunning, the only problem in a country such as India is that motorists, particularly the autorikshaw and bike riders will ruin it... Volkswagon has a good branding name in whole over the world the reason is all because of there powerful cars. And proudly polo is one of those. I love driving this car this car is really awesome . I would recommend all that they should go for this car. 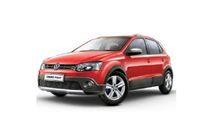