The awsm car the world ൽ

The awsm car in the world

He Ferrari California is a grand touring sports car produced by the Italian manufacturer Ferrari. It is a two-door 2+2 hard top convertible. When originally released, the California was powered by a front-mid mounted naturally aspirated 4.3-litre V8;[1] in 2014 Ferrari introduced the second generation of the model, named California T and using a new twin-turbo 3.9-litre V8. The car revives the name used on the late-1950s Ferrari 250 GT Spyder California and the 1960s 365 California. The California represents a number of firsts for Ferrari: The first front engined Ferrari with a V8 The first to feature a 7-speed dual-clutch transmission The first with a folding metal roof The first with multi-link rear suspension The first with direct petrol injection Bosch produced the direct injection system. The engine displaces 4,297 cubic centimetres (262.2 cubic inches), and used gasoline direct injection. It delivers 338 kW (453 bhp) at 7,750 rpm; its maximum torque produced is 485 Nm (358 lbfft) at 5,000 rpm. The resulting 79 kW (106 bhp) per litre of engine displacement is one of the highest for a naturally aspirated engine, as other manufacturers have used supercharging or turbocharging to reach similar power levels.[6] The body computer system was developed by Magneti Marelli Automotive Lighting. 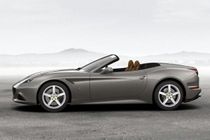