New class Verito is the latest addition to the Mahindra's much appreciated sedan class. Mahindra created advertisements targeting daily urban commuters. The advertisement titled 'Discover New Look Mahindra Verito Features' is a continuation to the earlier installment on Style titled 'New look Mahindra Verito – Style' featuring two men discussing the exteriors and interiors in detail. This second installment follows three women comparing their vehicles on the basis of comfort, safety, interiors while driving through the city roads. The advertisement concentrates on the high pick up diesel engine offers over traditional models. The 1.5 MPI petrol engine variant is also suggested for customers with specific requirements in terms of pick up. The diesel variant offers an amazing 21kmpl mileage.   The women discuss issues such as comfortable driving in urban roads as well as rough terrains as a personal experience to a religious pilgrimage is referred. The ground clearance of the new look Verito is also developed enough to avoid any chassis contacts over speed breakers thereby offering a smooth drive. One of the main issues discussed in terms of interiors is the large leg space offered for the rear seats. Mahindra claims the best rear seats in its class. Reflecting the customer perspective of car which not only needs to stylish but it should also be comfortable. Three head rests are provided at the rear row literally enabling three people to be comfortably seated. Though leg space is increased, the seat length is not decreased so the comfort is not compromised. Mahindra which already made a decent mark for itself in terms of safety measures once again provided ABS with EBD which not only helps avoid injuries during impact but also helps the vehicle be stable irrespective of luggage weight included in boot. The 510-litre boot space is also discussed which is helpful especially for long drives. The tachometer also features a Driver Information System (DIS) which helps driver keep track of information such as miles to go before peptrol runs out, fuel tank status, etc., The advertisement concludes with the other women being convinced regarding their sedan purchase. The advertisement was part of the innovative efforts by Mahindra to help people “Grow to the New Verito” 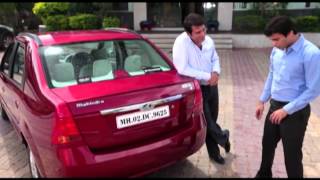 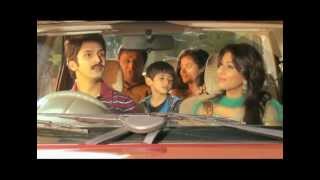