Nissan spices up its Sunny with a Handsome Sedan

Nissan's in-house performance division is SUNNY. The skunkworks-like outfit has added its touch to everything and the work touches just about every important facet of the car. For Nissan SUNNY, the SUNNY starts with an aggressive new look that sees the body kit focus on better aerodynamics and a 30 percent reduction of lift at speed. Visually, Most of the add-ons are accented in a sharp color, serving to set it apart from its mortal sibling. Just in case it is mistaken for something less. Inside, it's all about the driver. The steering wheel has a chunky feel complete with the right way up, The bigger changes are found beneath the body kit. For starters, the SUNNY gets a 1.5-litre turbocharged and intercooler five-speed manual transmission, torque 6000 rpm. Having given it the go factor, SUNNY turned to the handling side of the speedy equation. There is barely a common nut or bolt to be found. First, the body has been stiffened, the front firewall is thicker, plus the floor and rear parcel shelf have been reinforced. The stiffening reduces body flex and improves the feedback the driver receives from the car. The SUNNY-specific suspension gets revised springs all around and firmer front strut tuning to go along with the monotube rear shocks that support the twist beam. Nissan says the response time from the shocks is faster and so they do a better job of keeping the rubber on the road. The speed-sensitive power steering setup has been reworked so it now has a better on-centre feel and a faster response to the input. Capping off the handling items are larger front brake rotors and It is an extensive makeover that comes together nicely. The first thing that surfaced on the very short test drive was just how well body motion has been controlled. The SUNNY neither squats under hard acceleration nor does it kneel and kiss the tarmac when the brakes are hammered. As a result, it feels pretty darned nimble. The short nature of the drive did not allow the Sunny to be pushed, but through one back street, it did begin to understeer when pushed into a corner, and mainly because of the mass over the front wheels; after all, the front end carries 55 per cent of the car?s weight! However, when compared to most front-drivers, this pocket rocket felt quite benign. A track day will reveal all. On the surface of it, the SUNNY seems like an odd candidate to get full-on. Dig beyond the fact it is a compact four-door sedan and that perception changes. In much the same way the Sunny is likely to appeal to those who want more performance and a healthy dose of expression without paying through the nose to get it. 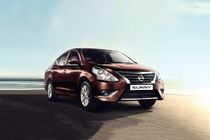