Class of a car depends on its design

Class of a car depends on its design

Starting with the tech specs, it is powered by the same 1.6-liter turbocharged engine, which takes the vehicle to a top speed of 202kmph. Its prowess on the road is guarded with a range of important safety features. And with some of the needed features like Techno aids which prevent loss of control, ranging from the ABS, the ESP, the ASC, while an electromechanical power steering system imparts aid to the driver in case of critical drive scenarios. Also present is a tire pressure warning system, a seat occupancy sensor for the front passenger, a central locking system and an automatic locking facility for the doors. And with other notable features include an illuminated glove compartment, electrical adjustment, and memory facility for the driver's seat. Bluetooth interface provides a central hub for hands-free calling and audio streaming within the cabin. The power-train generates a torque of 200Nm at 1250rpm to 4000rpm, coupled with a power of 122bhp at 5000rpm. The working of the engine is further enhanced with a seven-speed dual clutch transmission, which ensures a strain-free functioning for the driver. 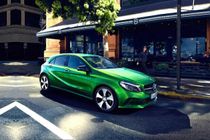