If there was something lacking in the Etios Liva, it was a fair bit of flamboyance. It?s got a reliable drivetrain, a sorted chassis and decent driving manners, but the styling won't be a major highlight on its resume.But Toyota has nearly acknowledged that, and has now come up with a change. But hold on, it's not a mid-life update or a facelift. Toyota is aiming at making a 'new' crossover out of this compact city hatch.How, you ask? First, it has slapped on some serious plastic cladding all over the car. So, does putting on some cladding convert a hatch into a crossover? Not really. But this path isn't new. Seen the VW Cross Polo? Yes, it's a rare sight which may indicate what lies ahead for Toyota's new baby crossover.Anyway, to the Etios Cross ? on the outside, as we told you, it gets plenty of plastic, a skid plate at the front, roof rails, and some more plastic cladding on the boot lid. Along with that, it gets a new orange colour as an option and new 15-inch diamond-cut alloy wheels.Luckily, Toyota has found the time to do a bit of a change to the dreary interior of the Etios. It now gets generous doses of piano-black finish on the dash, a few splashes of chrome and new fabric upholstery. Though the piano-black finish attracts layers of dust, we'd pick it any day over the relatively dour colour-tone of the regular Liva.In the features department, there?s an audio system with USB, Aux-in and Bluetooth connectivity. There are also steering-mounted controls, but no electrically-adjustable ORVMs or reverse sensors even on the top-end variant.Mechanically, nothing changes. Even the suspension setup remains the same. Only, those new 15-inch wheels (instead of the 14-inchers on the standard hatch) give 4mm of extra ground clearance, in addition to the 170mm of the regular Liva.The Etios Cross comes with an option of three engines ? two petrols and one diesel. The smaller petrol is the 1.2-litre block that you get in the regular Liva, and the bigger motor is the 1.5-litre one that you find under the hood of the Etios sedan. The 1.2 is good for 79bhp and 104Nm and the 1.5 churns out 89bhp and 132Nm of torque. The oil-burner develops a rather modest 67bhp but a healthy 170Nm of torque.The Etios Liva never disappointed in terms of ride quality and the new one too continues to do so ? it?s supple and absorbing. The steering is on the lighter side to aid city driving, but feels low on feedback.So how much does this ?crossover? cost? That's Rs 5.76 - 7.40 lakh (ex-showroom, Delhi) depending on engine and trim. The Cross adds a bit of zest to the otherwise boring styling, yes, only a small bit, but it does. The interior is a notch better. So if you want a city car that looks like it will be at home in the wilderness, this version of the Etios Liva should cross your mind.The numbersG: 4-cyl, 1197cc, 79bhp, 104Nm, petrol, 5M, FWDV: 4-cyl, 1496cc, 89bhp, 132Nm, petrol, 5M, FWDGD/VD: 4-cyl, 1364cc, 67bhp, 170Nm, turbo-diesel, 5M, FWDThe verdictLooks a tad bit better than the Liva but is nowhere close to being a crossover. Still very much a proper city hatchback i enjoyed driving from 1 year and sooooooo thank you Toyota 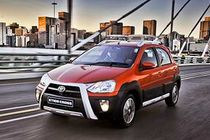