The first innings of Maruti?s debut compact crossover SUV was a flop show. The car hasn?t been sold in many numbers Maruti had hoped for. One of the major reasons for the car not making up to the mark was its weird and uninspiring looks that took away a large number of customers. Surprisingly, the weird looks continued in the facelifted version which was launched last year, although better than the earlier one. Love it or hate it but the sales numbers still show that the car is far behind Hyundai Creta. I was with my friend at one of Maruti?s outlets in Delhi and now I am sharing the first-hand experience. It seems designers at Maruti have pinched the nose and picked up the jaw-line off the ground. The chrome and revised smoked headlamps did help the nerdy looking car gather some support. The new face, however, will divide the opinion on the roads and among the enthusiasts. Some people who are not familiar with the car may misinterpret the front face with that of BMW. Such misconstrued viewpoint is largely due to headlamps flowing into the solid chrome grille. Walk around and you will find that except the new 16-inch alloy wheels and revised LED taillights, the story is the same. But the car certainly looks aggressive than the previous model, which was highly criticized for its timid appearance. But still, in terms of styling, the new SX4 S Cross can?t match the aura of Hyundai Creta, which has been a hot favorite compact SUV for nearly 3 years now. Secondly, the poor Nexa service experience and lack of petrol engine and automatic variant will further take away a large chunk of customers. So, Maruti needs to do a lot of homework in order to keep pace with the competition. 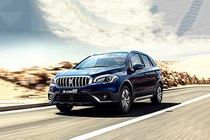 this review is copied from team BHP..shame..

this review is copied from team BHP..shame..