Hyundai i10 : The First Choice Of Urban People

I have been driving this car for the past one year and in one year, the Hyundai i10 has become a popular car in India. My satisfaction from this car is good and I can say that I am pretty satisfied with the performance of this vehicle. Space inside the car is good and especially entering in the car is easier and comfortable than other models of this range. The Hyundai i10 has an engine of 1086 cc engine which is an inline four cylinder engine. It is a smooth engine which doesn't make noise while we raise its speed. In all variants of Hyundai i10 the D- lite variant is the most popular model and I also have this variant. Now some negative part of the Hyundai i10. The Hyundai i10 is slightly expensive than other models of this range and the back portion of the model has a scope of improvement. Overall it is a uniquely designed car which has a powerful engine.

hii i m lokking for this i10 but have huge confusion in betwenn the models. because in that range alto k 10 santro and ford figo base models are acceptable. help me in clearing my confusions pleaseeee

hi vinod, could you tell me that Hyundai i10 electric variant, when will introduce in Indian market. It such as eco-friendly car for India. I will get it. 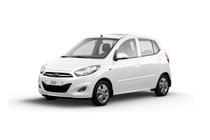